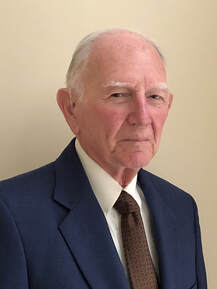 Gregory Sutliff
The 2018 recipient of this distinguished honor is Mr. Gregory Sutliff, the Valedictorian of the Camp Hill High School Class of 1949. After graduation, Mr. Sutliff attended Brown University under a United States Navy Scholarship. He later spent three years serving on the USS Soley and with the 3rd Battalion 3rd Marine Division in Japan as a naval gunfire controller.

Upon return from the military, Mr. Sutliff attended Dickinson Law School in 1959 and began working full-time as a dealer at Sutliff Chevrolet, eventually rising to general manager in 1962. During his career, Mr. Sutliff became Chairman of the National Chevrolet Dealer Council and joined the boards of the Pennsylvania Dealer's Association, the National Dealer's Association, Commonwealth Bank, Capital Blue Cross, Polyclinic Hospital, the Camp Hill School District and The Lion Foundation. He also served a term on the Camp Hill Borough Council.

Courtesy of the U.S. Navy, the U.S. Marines, General Motors and his own wanderlust, Mr. Sutliff has enjoyed many travels over the years. He is married to Susan Sutliff and they have six children (all graduates of CHHS) and 13 grandchildren. He has lived in Camp Hill for 78 of his 86 years.
​
As The Lion Foundation’s Wall of Honor recipient, Mr. Sutliff was honored during an in-school assembly and recognized at The Lion Foundation Winter Celebration on February 2, 2019. Congratulations to Mr. Sutliff on this most deserved honor! 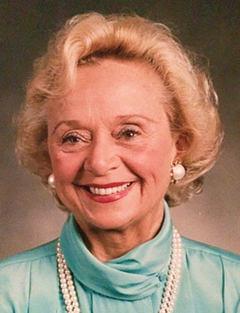 Phyllis Shearer Mowery
Most small towns and communities are fortunate to have a few people who truly change their town’s face through their interest, attention, and involvement. Phyllis Shearer Mowery is one of these people and the reason why The Lion Foundation has named Phyllis, (or “Phyl”) as she is better known, as the 2015 recipient of the Camp Hill Alumni and Staff “Wall of Honor”Award.

A lifelong resident of Camp Hill, Phyl had just retired from real estate in 2003 when her son Ted, then President of the School Board, asked her to help establish a much-needed organization capable of subsidizing academics, cultural, and athletic programs that would enhance the quality of life for all borough residents, specifically students enrolled in the School District.That lead to a key role in convening like-minded community leaders to successfully spearhead a 1.3 million dollar capital campaign that established what is known today as The Lion Foundation.

Phyllis helped guide The Lion Foundation through its formative years, completing projects which included landscaping the high school/middle school, installing visitor’s bleachers at the Siebert Park Stadium, and building the Siebert Park Stadium Mowery Family Press Box, named for the family’s commitment to the Camp Hill Schools and Community. Phyllis also served as one of the first presidents of The Lion Foundation and continues to participate as an Emeritus member of the board.

Phyllis was also instrumental in securing the 15 million dollar gift from Mrs. Grace Milliman Pollock to build and endow the Grace Milliman Pollock Performing Arts Center (PAC) at the Camp Hill School Districts’ Eisenhower campus. Phyl continues to remain involved as a PAC board member as the PAC settles in as a recognized venue for the Arts in Central Pennsylvania.

During her years growing up in Camp Hill, and as a student in Camp Hill High School, Phyl participated in basketball, field hockey and color guard among other activities. Phyl then attended Gettysburg College where she joined Chi Omega fraternity, was captain of the cheerleaders, Outstanding Junior, Who’s Who in American Colleges and Universities, and the Gettysburg Honor Society. She graduated with a Bachelor of Arts Degree in Psychology.

Phyl married the late Senator Hal Mowery, with whom she celebrated 60 wonderful years. Phyl has three children, Hal III, Ted and Dee, eight grandchildren and one great granddaughter. Her many activities included Den Mother and Brownie Leader, tennis and swimming instructor for the Boro recreation program, and volunteer tennis coach for the Harrisburg Academy and Camp Hill High school girls tennis teams. She serves on the Board of Directors of the United Methodist Home for Children, the Cumberland County Board of Republican Women, member of the Camp Hill Women’s Club, Daughters of the American Revolution, Board Member Emeritus of Holy Spirit Hospital, past Behavioral Health Chairperson, past Harrisburg Symphony Association Board, and [past] Comfort Care board member. Phyllis remains a Member of West Shore Country Club, where she is past ladies 18 hole Golf Champion and past ladies Senior Golf Champion in Pelican Landing, Florida. She enjoyed participating in tennis and holds several single and doubles titles. Phyl has been a lifetime member of Trinity Evangelical Lutheran Church, where she was President of the TMTM Class, and an alter guild member.

Phyl loved being a “stay at home mom” so her work experience is brief, including Department of Public Assistance and Remedial Reading teacher at the Harrisburg Academy. After the children married and left home, Phyl became a Realtor, where she was consistently recognized as a “Pacesetter” and member of the Greater Harrisburg Board of Realtor’s Winners Circle.
2014 Wall of Honor Recipient
​Dr. James Forrester, Class of 1955 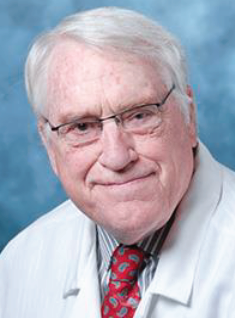 Dr. James Forrester
The Lion Foundation has named Dr. James Forrester as the 2014 recipient of the Wall of Honor award. During his time as a student at Camp Hill High School, Jim, as he was known to his friends, led the Class of ’55 as Student Council President, was in the National Thespian Society and served as the editor-in-chief of the school’s High Light newspaper. Basketball was clearly his sport of choice. His towering jump shots and ability to drive to the net made him 2nd in team scoring, which helped the Lions reach the quarter-final playoff game his senior year. His senior yearbook describes him as a “pillar to the hall traffic system...argues to live and lives to argue...a flash of red hair on the basketball court...High Light’s boss and Student Council leader.”

Upon graduation, Jim went on to receive a bachelor’s degree, with honors, from Swarthmore College and medical degree from the University of Pennsylvania Medical School. Following his internal medicine residency at UCLA-Harbor Medical Center, he completed his cardiology fellowship at Harvard University.
Dr. Forrester is a professor of Medicine at the University of California, Los Angeles. Since the early 1970’s he worked at Cedars-Sinai Medical Center, most recently as Emeritus Professor and formerly as Chief of the Division of Cardiology, where his work and research led to major advancements in cardiovascular treatment. For example, in the 1980’s, he and George Diamond, MD, created a diagnostic test that is used worldwide in cardiology to detect the probability of coronary heart disease in patients. He also advised a team that developed coronary angioscopy, which allows cardiologists to examine the surface of the coronary artery in patients who have suffered heart attacks.

In addition to numerous awards and honors, Dr. Forrester has published over 400 full-length scientific manuscripts and Heart Healers: the Misfits, Mavericks and Rebels Who Created the Greatest Medical Breakthroughs of Our Times. His honors include the Leon Good Award for excellence in laser research, nomination for the Woodward and White’s Best Doctors in America, and a Lifetime Achievement Award from the American College of Cardiology.

“I treasure my Camp Hill High School years. In my mind’s eye I can see every single classmate and every teacher’s face as I knew them then. In a small town with just one high school, our teachers became an intimate part of our lives, dedicated to our maturation into young adulthood...With just 70 kids in the class of ‘55, Camp Hill High allowed so many of us to be a big fish in a small pond at a crucial time in our youth. My own good fortune was to be president of the student body, editor of the school newspaper and a starter on our basketball team. I believe that those small school experiences imbued us with the self-confidence to confront the new challenges of adulthood. In my case, I teach the practice of cardiology to young doctors. I first learned about great teaching at Camp Hill High, and I too aim to inspire the next generation. So allow me to honor my own teachers from treasured memory. Principal Don Enders, teacher-coaches Ernst, Bulota, and Kraus, specialty teachers Rhodes, Witt, Schechter, and Newton among many others...Teachers never know where their influence ends, it affects eternity. Thank you for allowing me to share this honor with them.”
- Regards, Jim
2013 Wall of Honor Recipient
​Dr. Edward D. Harris, Class of 1954
2012 Wall of Honor Recipient
​Dr. Bill Phillips, Class of 1966
The official registration and financial information of The Lion Foundation may be obtained from the PA Dept. of State by calling toll free within PA 1-800-732-0999. Registration does not imply endorsement.